After long decades in the market, Storz & Bickel finally revealed their new Volcano Hybrid that fits our new digitalized world.

The vaporizer promises similar high-quality vapor production with a dose of technology. For someone who never tried a Volcano, it is a top-notch desktop vaporizer like no other where half a balloon will bring you out of this world.

The look & feel of the new Volcano Hybrid will be familiar. The iconic volcano shape has remained intact. The appearance of the device has been modernized and the controls have been converted into integrated buttons. 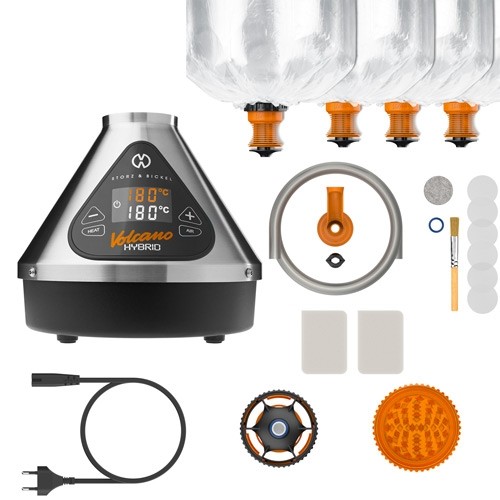 The functionality is still simple: fill the room, choose a temperature between 40 ° C and 230 ° C, activate the air pump and just let it heat.

Speaking of heating, an improved dual heat exchanger provides a faster heat-up time. The Hybrid is ready for use within 40 seconds.

Is it the same old Volcano?

First of all, the inner engineering of the Volcano Hybrid is similar to the Volcano Digit and the Volcano Classic. The vapor quality is identical due to the same construction. Thus, allowing you to use the same accessories from the OG Volcano’s Easy Valve. Most importantly, the “Made in Germany” Volcano Hybrid has the same high-quality materials and artistry.

Newly erupted
Launched in Summer 2019, the Volcano Hybrid brings in a new vibe to the OG Volcanoes. It comes with a large touch screen control panel and a tube system on top of the traditional Volcano balloon system. Other than the significant physical changes, the Hybrid heats up faster and reaches 180°C in only 40 seconds. Other than that, the introduction of the tube allows you to vaporize with ease. And it is more eco-friendly due to less plastic usage.

The TUBE
The new tube system to the Hybrid is a big plus to most people as it requires no extra steps like the balloon system. Not only it simplifies the Volcano experience, but it also reduces electric usage as it can run without activating the air pump. However, the air pump switches on briefly to signal you when the temperature reaches. You may vaporize your herbs as soon as you take a draw through the tube. Furthermore, the tube swivels 360° for more natural passing.

The APP
Storz & Bickel merges the APP for the Volcano Hybrid with the portable Crafty vaporizer to simplify your vaping experience, indoor or outdoor. The App connects to the vaporizer via Bluetooth and can do more things you cannot do on the control panel, especially software updates. Besides, you can dim the lights and change the 30 minutes shut-off timer. You may download the Storz & Bickel App for Android and iOS.

The heat
The Hybrid heats way faster than the OG Volcanoes with a maximum of 2 minutes to reach the highest setting. The Hybrid comes with a wide temperature ranging from 40°C to 230°C that you can set on the device or the App. Also, it comes with a chamber reducer to vaporize smaller amounts efficiently.

What's in the box