When you think of the DaVinci brand, you naturally immediately think of the famous artist, but this vaporizer manufacturer is really different. They guarantee reliable products with an eye for detail and functionality.

This also applies to this new model. The IQ2 has a number of revolutionary new features including the wheel on the bottom of the device that allows you to adjust the airflow to your own liking for an even more optimal vaping experience. They have also added a lot of technology with which you can, for example, keep track of the dose of your cannabis used by means of an app and on the device. (Note: The app is currently only available on Android devices. iOS users can use these functions on the device itself).

The DaVinci IQ2 is also excellent to use when vaping concentrates.

Dose calculation on device and in-app

The DaVinci Dosage Algorithm is a patent pending calculation on a number of variables; The amount loaded into the device and the potency or type of the herbs.

The IQ2 keeps track of everything for you. Your dose, the types of cannabis you use, and even how long you hit with what airflow settings. These measurements allow you to keep track of how the device performs with the different types of cannabis you have used, and based on this you can tailor your use to your liking. You can also choose to use the supplied caps. With this you always load the room with 0.2 g of cannabis.

Currently, the app can only be used on Android devices, but iOS users can also use all these functions via the device itself. 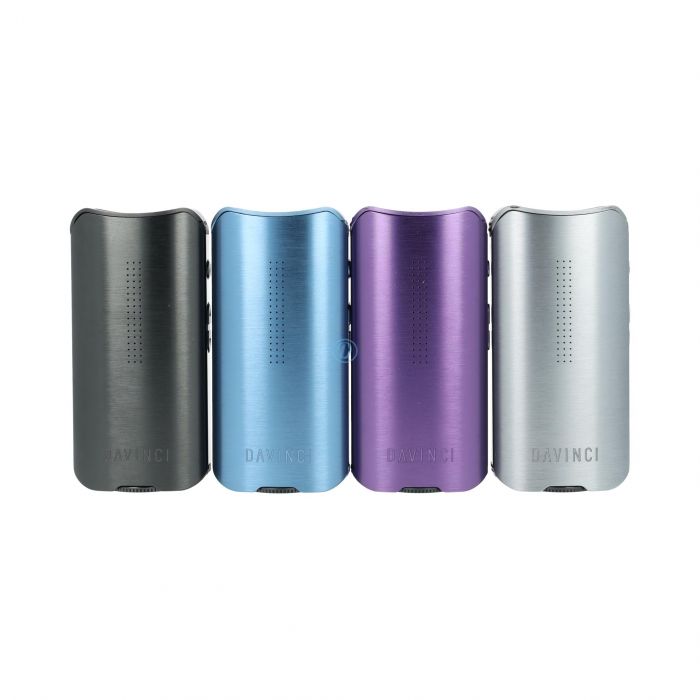 The adjustable airflow is DaVinci’s second best new feature; five adjustable levels will produce different results. The pull resistance on the IQ2 has been greatly reduced compared to the original IQ. On the other hand, with better airflow, the vapor from the IQ2 is 50% cooler than typical vaporizers, and you can adjust it as needed. For a dense vape, you can reduce the airflow and increase the draft resistance by turning the knob clockwise.

At first glance, IQ2 resembles the IQ as they both have a similar case. However, the material is different and may be the reason that it is lighter despite additional features and improvements. It has the same 51 LEDs and three-button controls to navigate the modes and temperature settings. On the other hand, the IQ2 comes with a brushed aluminum finish and differentiates it from the original DaVinci IQ (OG IQ).

The IQ2 comes with a removable 18650 battery with 10A continuous discharge, which DaVinci claims will extend the life of your vaporizer. And if the battery gets old or defective, you can replace it instead of buying a brand new device, unlike vaporizers with built-in batteries. Most importantly, the IQ2 has better thermal management, resulting in less energy required by the unit to maintain temperature, while initial heating takes less than a minute. It has a huge capacity of 3500 mAh, which allows it to be used continuously for an hour. However, it takes 6 hours to fully charge the battery. To solve this, you can purchase the external charger that cuts the time in half and can charge two batteries at the same time.

First of all, the DaVinci IQ2 is another level of OG IQ and not an entirely new game. Therefore, it has the features of the OG IQ, but with a little updating of details. Yes, the inside of the device is still full ceramic zirconia, including the taste chamber, the heating chamber and the chamber reducing pearl. Furthermore, the temperature modes and settings remain as follows:

Raises the device to 221°C when you press and hold the IQ2 control button. This mode is best for the end of your session to extract the remaining active ingredients from your material. In the same way, you can use it anytime for a fast and very powerful vape. Press the up/down button to continue with the previous temperature or mode.

This mode is activated when you release the control button during BOOST mode. It cools the device to save the material and save the battery. Then the device turns off after two minutes of inactivity.

This mode adjusts the brightness of the LEDs for a quiet session, especially when you don’t want attention in public. On the other hand, it is useful if you use the IQ2 in bed for quiet night sessions.Smart Path: The IQ2 is programmed to operate in this mode when activated. DaVinci developed it for a practical and uncomplicated session. The session lasts 8 minutes and the device will gradually increase the temperature by itself. There are four pre-selected ranges and it is wise to start with the lowest.

What's in the box